About a week ago I finally took my assessment to fully earn my ears! It was super easy. One of my managers pulled me aside during work and had me sign a few papers to finish off my training folder. After that was all complete, she asked me a few questions such as, "What's in our Polynesian salad?" and "What time do we change from breakfast to lunch?" There were really only a handful of questions and she asked if I had any questions about something that might have not been fully explained to me during training. Then I was done! Boom! Officially earned my ears!!

Since then I've been completely on my own at work, and really it's not difficult. The first day was kind of a handful because it was one of the busiest days we've seen in a while and I was on counter. My manager came out to help a little and reminded me that I needed to take care of the bakery area and make sure it was stocked (which I had done on stocking day..not counter, so I didn't know this was part of my role that day). When I get really busy and try to be fast and efficient, I guess I have a really stressed out look on my face because the chefs kept asking me if I was okay. Which I was a little frazzled from the immense amount of people on my first day on my own, but overall I was fine. I forgot that you had to tell the person in charge of stocking when we ran out of cupcakes so he could go up and get more from the main kitchen, but now I know!

For the past week I've mainly been on counter, with only one day as a breaker. As a breaker I was in charge of taking over certain people's positions for an hour or so while they go on their break. That day I was breaker for two of the cashiers and then one of the people on counter. I successfully went through two hours of cashier without forgetting a single pager!! *happy dance* When I wasn't breaking someone, I was basically on dining room making sure everything was stocked and clean for the guests. Basically, I did every position that day (besides the main stocker, which I won't really ever be doing anyway).

The rest of the week I've been counter, which makes me happy because I really like the fast paced nature of it and there aren't any pagers I need to remember to assign ;). I actually have been impressing one of my managers with how fast I handle everything in the kitchen, and then another day with how well I keep the bakery stocked even though I'm busy. Yesterday a guest told me I have a nice smile! Made me feel warm and fuzzy.

On my days off I've been mainly hanging in the parks. I'm usually a really big ride person when I visit Disney, but since I'm living here for five months I've been keeping everything relaxed and just enjoying the magic each time I visit. I'll throw in a few rides here and there, but I've mainly been exploring areas of the parks I've never seen, watching parades, or even watching children smile when they meet characters. I still need to go character hunting soon. I've met Ariel, The Incredibles, Wreck It Ralph and Vanellope, Duffy, Pooh, Eeyore and Tigger. I still need to meet Mickey! I've been here for almost a month and that still hasn't happened. That needs to change, pronto.

OH! I haven't shown you guys my costume yet! Here it is, in all it's beauty: 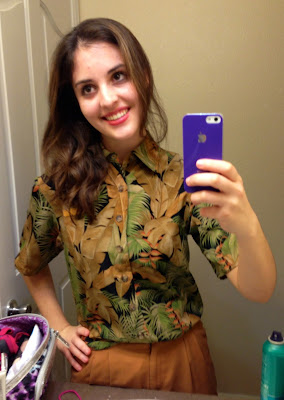 There's also a hat that goes with it, but it's just a baseball cap that's the same color as my pants and has "The Polynesian" written on the front.