DCP: All About Shoes

Every cast member has a specific dress code to adhere to called the Disney Look. Under these requirements, hair must look natural and well groomed, nails painted a neutral color (or not at all if you work with food), and your costume for work must always be the right size and wrinkle-free. While Disney supplies your costumes for you, the one aspect of your costume that you might have to buy on your own is your shoes.

Some people preparing for the DCP may wonder what kind of shoes they will need to buy for their program, but unfortunately Disney does not tell you where you'll be working until the day of your check-in. The type of shoes you will need depend on your role and your location, since each costume can require different colors or kinds of shoes that match with what you're wearing.

Those participating in foods (quick-service and full-service) are provided with shoes within the first couple days of training. You will either receive black or white non-slip shoes, depending on your location and the costume. I'm going to warn you right now...the shoes that they give you are extremely uncomfortable. It took me about two weeks to even break them in...and after a couple months they were almost falling apart. If you can possibly find an affordable pair of non-slip black or white shoes on your own that are more comfortable, I highly recommend it. While I was able to survive those first few weeks of breaking them in...working eight hour shifts for five days each week made my feet throb almost every night. Make sure you also buy arch supports or Dr. Scholls to help make your shoes more comfortable...they basically saved my life during my program.

If you aren't participating in food and beverage during your program, you will need to buy your own pair of shoes for work. Most roles simply require black or white shoes (usually black). However some positions with heavy theming such as Jungle Cruise or Kilimanjaro Safaris require special shoes like hiking boots. You will receive specific information about what shoes you will need to buy within your first few days at Disney.

For Disneyland specifically, attractions requires all black shoes made with all of the same material. When you wear pants, you must have black socks. If you decide to wear shorts, you must have white socks. Some costumes for girls require panty-hose or tights, which you'll discover within your first few days of training and orientation.

Once again, if you're participating in the program and you're worried about shoes, don't stress! You'll receive all the information you need once you arrive. If you need to buy shoes (or choose to buy shoes instead of the ones they provide for foods), you can usually find some that you need at either WalMart, Payless, or Target. There's a outlet mall right around the corner from some of the apartments in Florida that you can visit as well! 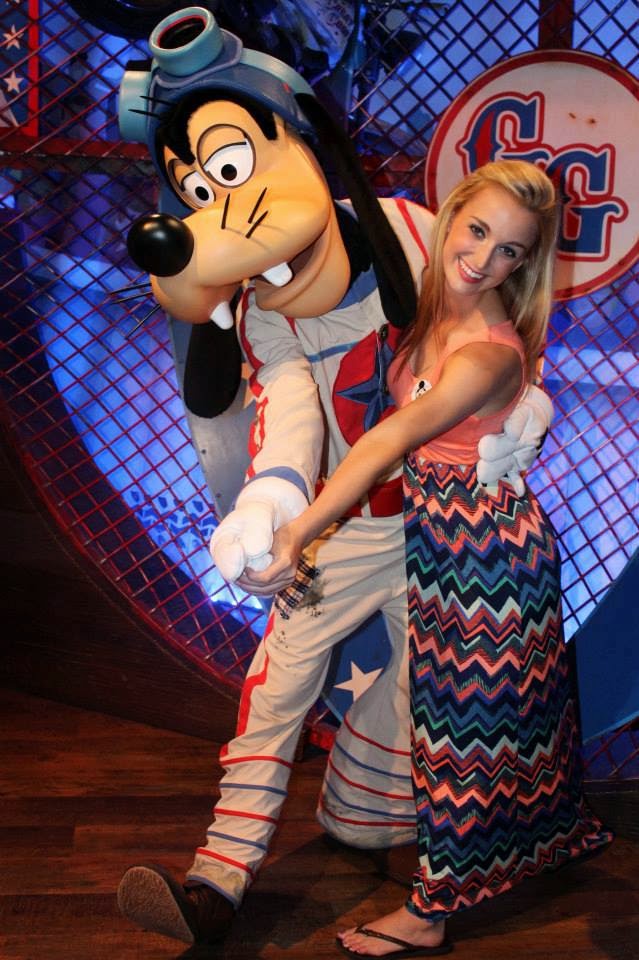 Entertainment is an extremely popular role for people applying to the DCP. When Caitlin volunteered to participate in an interview, I couldn't say no! I added a few questions at the end specifically for her role that some of you might want to know. Enjoy!

What role did you have during the DCP, and where did you work?
I was a character performer! As a character performer, I was a global cast member so I could work at any of the parks. I spent most of my time in Magic Kingdom and Epcot!
What was a typical day like at work?
Because I could be at any park, each day was different! Typically I would get to work, have an hour to warm up and gather everything I needed for the day. Then I would hop on a van and be driven to my location which was either in the park at a meet and greet area or at a resort dining location. I would have a day full of creating magical memories, broken up by frequent breaks and lunch, and then head back to the base, drop off all of my work items, and head home!
Is this the role you originally wanted? If not, are you happy you got it?
I originally was placed in the role of Full Service Food and Beverage before I attended a character performer audition. I was hopeful to receive an entertainment role, but I would have been perfectly content in my original role! I am so happy that I was chosen to be a character performer. It was the most magical experience and I am currently still working as a seasonal entertainment cast member!
What are your favorite and least favorite parts about your job?
My favorite part of my job was creating magical moments for the guests as well as cast members. There were many times when I would sit back and think.. wait... this is my job?!! The obvious struggle and worry with being a performer is working in heat. As long as you stay hydrated, you will be just fine!! I can't really think of anything I would classify as least favorite. There were tough days, but then I would remember how many people would love to be in my shoes and how blessed I am to have received this role!
Any specific magical moment you want to share?
I have so many magical memories from my college program! One that sticks out in my mind happened one day when I was driving to work. It was pretty early in the morning and I was still not quite awake, kind of annoyed that I was up that early. I pulled up to the window at the cast parking lot and the little old man looked at my ID and he said "Now you go out there and create some magic!" That was a reminder that no matter how early it is, or how tired I may be, ultimately I am there to create happiness and magic for everyone who enters into Walt Disney World. No matter what your job is, you can create magic for cast members and guests every day!

What made you want to do the DCP?
I always have loved Disney World and all things Disney. My sister and I stumbled upon a recruiter at a career fair and just decided to apply! It was a spontaneous decision, but I am so glad we went for it. Who wouldn't want to work for such a prestigious company? I did my program the fall of my junior year, so it was a nice break from school to have fun and branch out.
Is there something you wish you would have known before doing your program?
I think that a lot of people go into the program thinking that it is going to be all fun and games and not an actual job. The college program is definitely an actual full time job and you will be working at the wee hours of the morning and late into the night. I remember the first few weeks my roommates and I were in bed so early because we were exhausted from work. We all quickly adjusted to our new lifestyle, but I would advise everyone who plans to participate in the program to be ready to work.
What advice would you give to those who want to participate in your role?
I would say be persistent! If you have your heart set on being a performer and you don't make it the first time you audition, keep trying! It is all about timing. You might be the perfect fit for a role, but they are not in need of that specific role when you audition. If you are blessed with receiving this role, enjoy every moment of it! 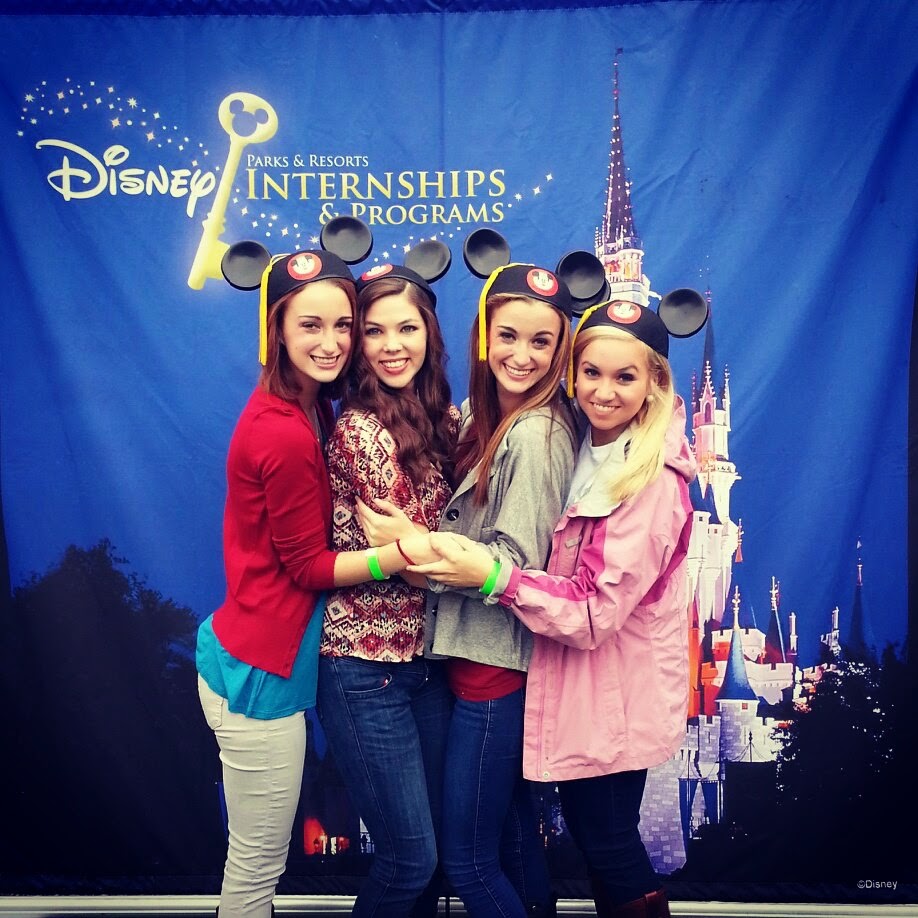 Any advice for the character performer audition? What should someone expect when they audition?
I would say first and foremost go in with a positive attitude! Never think that you are guaranteed the role because you have theatre experience or that there is no possible way you could be a performer because you don't have any dance experience. Just go and try your best with a smile on your face! My audition was two years ago, but I assume they are still run the same. There were about 300 people there, so we were split into two groups. We first learned a short, basic dance routine, practiced, and then performed in small groups for the judges. There was a cut and then we did an animation exercise. This consists of the casting directors giving you a scenario and you have a certain amount of time to prepare and practice acting out the scenario without talking (like you are a fur character). Then you are put in groups and perform your animation. After that you are taught a more technical dance. Don't let that scare you! I have no technical dance training at all, so do not feel like that is required. You will practice and perform that in groups and then you are done! Overall it is a very friendly, welcoming audition environment!
Here's just a few tips:
1. Go in with a positive attitude.
2. Don't stress about it! Keep an open mind and have fun. Whatever role you have at Disney will be amazing!
3. SMILE! Even if you are frustrated at the audition and are having trouble catching on, fake it til' you make it.
4. Wear something comfortable and figure flattering. I wore yoga pants, tennis shoes, a bright colored tank, hair pulled back and make up that highlighted my features.
What advice would you give to people who are interested in doing the DCP?
I would say GO FOR IT! Some people are skeptical about moving to a new state, having a full time job, living with strangers... it is all about the experience and working for the Walt Disney Company has been the best experience of my life so far!

If you're a current or past college program cast member and would like to share your experience, email your name and role to thedisneyden@yahoo.com to participate!
Posted by Sara at 8:48 PM No comments:

A couple months ago, Sara came to visit with her roommate from BYU and my best friend Holly! We spent the weekend in Disneyland together before the semester started, and I was so happy to finally see her again!

A few more updates...I've officially been trained at Soarin' Over California! I'm so excited to finally start working another attraction before the summer starts!

Hope you guys have a wonderful week!