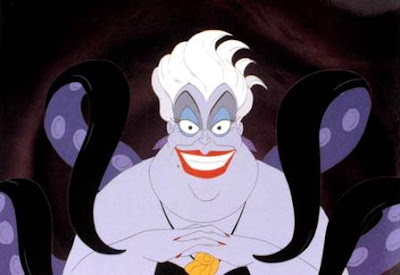 Ursula deserves this title for haunting my childhood nightmares when I was a little kid...I still remember one of those dreams! I was on a boat kind of like the ones for the Pirates of the Caribbean ride in Disneyland, and I was floating in an ocean towards this giant cave. The cave was kind of like a ride at Disney, but with her head on the top part, laughing maniacally like she does when she turns into a giant sea witch in The Little Mermaid. It's just me, slowly floating towards her while she towers over me with that laugh...