From The Grid to Wonderland 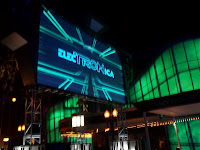 During the first few nights of my Disneyland trip last summer, my friend and I kept hearing loud music once the sun went down. Since our hotel was right across the street from the Disneyland parks, we noticed the loud party music was coming from California Adventure (the strobe and spotlights gave it away). However, we knew it wasn't coming from the amazing World of Color show Disney puts on every night due to the Lady Gaga, Rihanna, and Usher songs that were being played. We finally decided to check out the source of this crazy music on our final night, and discovered it was coming from California Adventure's ElecTRONica experience.

ElecTRONica was fascinating; it actually felt like you were inside the movie and the video game. However, once you get past the initial entrance, flashing lights, and loud music, you realize all there really is to do is either watch a preview of "Tron," buy expensive drinks, play games in the arcade, or dance (this is if you have missed the Laserman performance, which unfortunately I was not able to see. But you can see it online here). I was personally more interested in watching all of the special effects they had established in order to transform the Hollywood Backlot into The Grid.

If you have not experienced this Tron phenomenon, you better schedule a visit before April 2012, because it will be gone. Instead, Disney is introducing the "Mad T Party" this coming summer.

Modeled after Tim Burton's unique version of "Alice In Wonderland," Mad T Party will include two stages with live entertainment and DJ, new Wonderland-themed food and beverages, dancers dressed as twisted playing cards, characters from the movie, and an interactive video gaming area to replace Flynn's Arcade. Concept drawings of what will hopefully be the new and interesting T Party can be seen here.

What seemed to originally be only a filler for guests waiting to see the incredible World of Color has now grown into a popular them changing dance party. I personally think making a Tim Burton Alice in Wonderland themed dance party/club should be very...interesting.


For more updates on all things Disney, feel free to subscribe to The Disney Den now!