Why I'm Thankful My Dreams Were Crushed 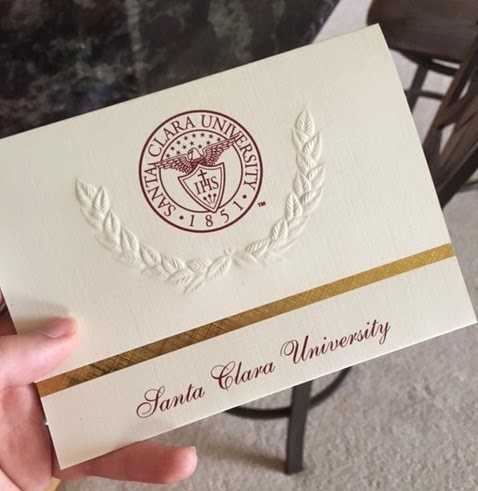 When I visited home a few weeks ago, I found an example graduation announcement (pictured left) in my junk mail. When I opened the envelope and saw this fake Santa Clara University card, I couldn't help but laugh.

Four years ago I was applying for colleges and preparing to graduate high school. Some of my friends weren't exactly sure where they wanted to go or what they wanted to do. I was one of the few who had her mind set: I wanted to attend Santa Clara University to pursue a degree in psychology and a minor in creative writing. I toured SCU earlier in the year and absolutely fell in love.

I received acceptances from all the colleges and universities I applied to (except Stanford which was no shocker), but the day I received the giant envelope from SCU I literally screamed and barely fought away tears. I knew my dreams were starting to come true.

Flash forward a couple of months and a few friends of mine were accepting offers and posting their excitement for their new future schools on Facebook. Meanwhile, I hadn't accepted SCU's offer yet. Finances were an important factor...SCU is a private school. Saint Mary's University (another private school) had offered me a huge scholarship to pay for half of my tuition and attend their honors program, so I had high hopes that SCU would do the same.

I took a deep breath and opened the email. My heart sank.

All they offered me was loans.

I was so upset. I knew that the reality of the situation required me to think of other options; I simply couldn't afford to go to SCU. I was crushed. I was so hopeful and confident in my plans...I didn't expect anything to go awry. I had no idea what to do.

Remembering what I was feeling when my clear vision became a complete and total blur reminds me of some messages I've been receiving from people about not getting accepted into the Disney College Program. I may have gotten accepted into the DCP when I applied, but this never would have happened if I hadn't gotten the disruption from not going to my dream school.

I've received messages confessing, "The DCP was my dream. I'm completely crushed. It's all I wanted to do. I have no idea what to do now."

When I read messages like this I respond in a way that reflects what happened with me. This was the moment that I realized that everything seriously happens for a reason. When one door closes, another one opens. Add any other cliche mottos/sayings you may have about challenges and opportunities, and they're all true.

The door to SCU shutting in my face opened up a chain of events that I never imagined would be possible. I decided to go to my community college near home, changed my major, finished early, and participated in the Disney College Program. I found the DCP because I knew I was finishing early and wanted to take that opportunity. I might not have even found the DCP if I went to SCU like I had originally planned.

I had doors closed during my DCP: I didn't get the role I wanted, I didn't get the apartment I wanted, nor did I work in a park like I was planning on doing. I wanted to work in attractions or merchandise at Hollywood Studios and live in Chatham Square. Instead, I worked in foods at the Polynesian Resort and lived in Patterson Court. I grew to love what I did and where I lived, and learned a lot about myself in the process.

After the DCP, I took another chance and did something I never thought I would do: move to Southern California. I transferred schools to a completely foreign city, far away from my family. Also, during my DCP my plan of becoming a campus rep was denied (another door closed), but this was great because if I had gotten that job, I would have never applied or gotten hired at Disneyland and meet all my amazing friends I consider my second family and have this incredible job.

Now not only do I work in attractions in California Adventure at my favorite rides, I accomplished a dream I never thought would be possible at my age:

I published a book.

Looking back, this dream was accomplished because another dream was crushed. Receiving this fake graduation invitation the other day reminded me that if I had attended SCU like I had planned, my life would be completely different from what it is today.

If you're rejected or denied from the DCP, an internship, a school, or any opportunity you might have your heart on, just keep in mind that there's a reason behind every action and every moment. This may have been the dream you wanted, but there's another dream out there just waiting for you to discover and accomplish. You can do it, I believe in you. It may be a rough path, but it's all completely worth it in the end.
Posted by Sara at 10:00 AM